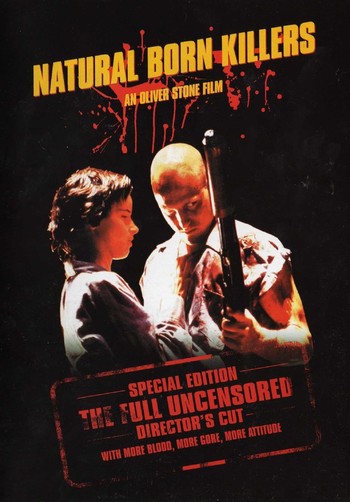 "You ain't seen nothin' yet."
"The media made them superstars."
Advertisement:

Considered to be one of the most controversial films of the 1990s, Natural Born Killers is a film by Oliver Stone. It derives from a screenplay written by Quentin Tarantino (which itself was a rewrite of friend Roger Avary's script, The Open Road, elements of which also contributed to True Romance), who conceived it as a dark exploitation thriller (with elements of satire), but Stone extensively rewrote it to the point where Tarantino disowns it as part of his work. Stone turned the story into a satire of the incestuous relationship between crime, the media and pop culture, and how the latter two glorify the former and turn mass murderers into cult heroes.

The film tells the tale of Mickey (Woody Harrelson) and Mallory Knox (Juliette Lewis), who captivate the world with a cross-country murder spree, killing 52 people with the special gimmick of always leaving one survivor to tell the tale. Despite being sadistic and largely unrepentant murderers, the media led by Australian tabloid journalist Wayne Gale (Robert Downey Jr.) turns them into pop culture icons. While the equally corrupt detective who arrested them (Tom Sizemore) and the warden (Tommy Lee Jones) at the prison holding the two plot to have Mickey and Mallory killed while transporting them to a mental institution for psychiatric testing, Mickey uses a post-Super Bowl special interview to stage a riot in the prison and escapes with his bride to freedom, leaving a trail of carnage in their wake as the entire prison goes up in flames and the staff is savagely slaughtered by the prisoners.

A psychedelic and surrealistic film (one that has been called "The Most Expensive Student Film Ever Made") the film sadly fell victim to Misaimed Fandom as some fans actually ended up liking Mickey and Mallory and their ultra-violent killing spree, which was what Stone was condemning. Similarly, quite a few critics failed to see the condemnation of media hype, instead fixating on the perceived glorification of violence. (Ironically enough, Tarantino's original script arguably places more emphasis on the "evil" of the Knoxes—making them less sympathetic.note  Tarantino himself soundly condemned the "sitcom" sequences in the film, apparently for that reason.)