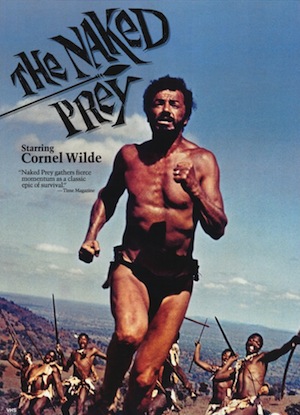 A 1966 adventure thriller directed by and starring Cornel Wilde.

Set in colonial Africa, the film stars Wilde as a hunting guide known only as the Man, who is kidnapped along with his Great White Hunter clients and Token Black fellow guide by a local African tribe. After everyone else is killed in horrific ways, the Man is set loose from the village to be hunted and killed for the tribe's hunters' amusement. However, his craftiness and deadliness are more than they're expecting...

An artifact of a pre-politically correct era with some very dated views of Africa, the film nonetheless features some stunning photography and even a few positive messages about interracial harmony. Also of note is that the main character hardly talks and the African dialogue is untranslated, giving the film a very primal focus on the horrific nature of the hunt as opposed to dialogue.

Mel Gibson's Apocalypto has more than a few plot similarities, as does Naked Fear.