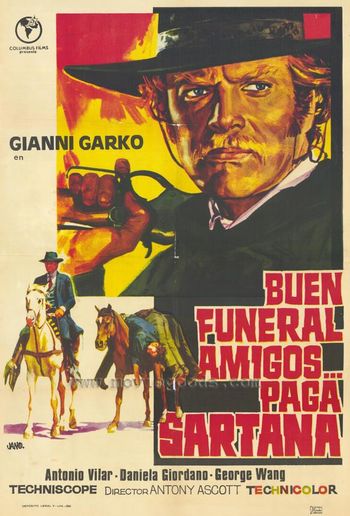 They don't make movie posters like they used to...
Advertisement:

Sartana is the name of a popular character from Italian westerns, most famously portrayed by Gianni Garko (sometimes credited as Johnny Garko in other territories). The character starred in a large number of movies, some official and some not (loose copyright laws in Italy led to a LOT of ripoff movies), but those considered "true" Sartana movies are those starring Garko.

Sartana himself is a very striking contrast to most Western heroes: instead of the grizzled, dust covered toughs seen in most westerns, he is impeccably dressed in a fine black suit and is witty and charming. He seems completely out of place in contrast with the ruffians he embroils himself with. However, this leads to the bad guys seriously underestimating him, with fatal results: he has absolutely impeccable aim with a gun (ANY gun), is always armed to the gills and is quite the Combat Pragmatist. However, Sartana's best weapon is his incredible ability to outwit his opponent. Half the fun of seeing a Sartana movie is showing him and his enemies constantly trying to foil each other's plans.

There has also always been speculation that Sartana is much more than he seems: like Clint Eastwood's nameless gunfighter in High Plains Drifter, it is implied that Sartana might be some sort of supernatural spirit of vengeance, paying just dues against those that abuse those less fortunate. Indeed, Sartana NEVER has any personal reason for helping the people, he apparently does it on a whim. However, he does show interest in personal gain: even if his actions help those less fortunate, money always seems to end up in his pocket when the movie's done.

The Sartana movies are great, GREAT fun. Sartana's stunts and machinations escalate to insane levels, and the movies are full of gadgets, anachronisms and plots that, while perhaps out of place in a typical western, just add fun to an already awesome character. Sartana himself is a master of the hidden weapon, with gadgets that would make James Bond take pause. The films also, surprisingly, have very elaborate plots, especially Funeral and Light The Fuse.

There are five "official" Sartana movies: the original directed by Gianfranco Parolini, and four sequels directed by his appointed successor Giuliano Carnimeo. All of them, with the exception of the third film, starred Gianni Garko as Sartana himself:

The final two films also have a musical score by Bruno Nicolai, long time friend and collaborator of Ennio Morricone. Indeed, Nicolai was the actual conductor of the orchestra that played Morricone's compositions, and his work in Italian film is almost as prolific and regarded as Morricone's. Accordingly, these two movies' soundtracks are AWESOME.

The Sartana films provide examples of: