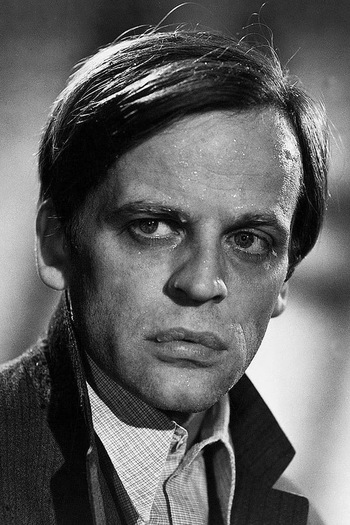 "The ultimate acting is to destroy yourself."
Advertisement:

Born in Zoppot in what was then the Free City of Danzig (nowadays part of Poland), Kinski was well known for his collaborations with director Werner Herzog in such films as Fitzcarraldo, Aguirre, the Wrath of God, Woyzeck, and Nosferatu the Vampyre, along with countless other roles, including playing villains in several Spaghetti Westerns. He is also, alas, remembered for being crazier than Caligula. The man was basically the walking embodiment of the Id and saw no shortage of prisons, hospitals, and asylums during his lifetime. That comment about him being a clinically verifiable psychopath? Not a joke; that's the conclusion the doctors who treated him came to.

Though hailed as a prolific and capable actor, Kinski had a reputation for being extremely difficult to work with. He raged about anything that did not suit his expectations. Herzog recalls his colorful working relationship with Kinski in the 1999 documentary My Best Fiend

. As the title suggests, the two men had a very tempestuous... we suppose 'friendship' isn't quite the word, considering that Herzog once had to pull a gun on Kinski on-set in order to get him to behave and work.

He was the father of actress Nastassja Kinski. They reportedly had a very unpleasant relationship; her half-sister Pola claimed to have been sexually molested by Klaus for years, and Nastassja alleged that he tried to molest her, too, but was unsuccessful. She hardly saw him after her parents' divorce when she was ten, and after his death stated that she had lived in terror of him and was glad he was dead.

Probably the most audacious project of Kinski's career was his 1971 one-man show, Klaus Kinski is Jesus Christ Savior (a documentary about it is now on DVD, and footage appears in My Best Fiend). Notably, even while delivering a monologue about Jesus (who he maintained was his personal idol), Kinski still got into several spats onstage and was nearly mobbed by the entire audience.

Kinski suffered a fatal heart attack on November 23, 1991 at his home in Lagunitas, California. He was 65.

Kinski parodies - most notably those by Max Gierman of Switch1997 fame - like to play up his sudden angry outbursts up to eleven as well as his penchant for doing weird things mimically.