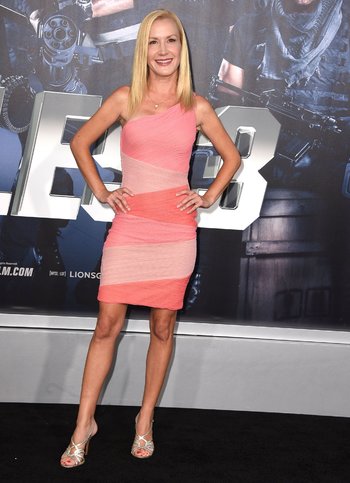 Angela Faye Kinsey (born June 25th, 1971 in Lafayette, Louisiana) is an American actress. She lived in Jakarta, Indonesia for several years in her childhood before her family returned to the United States and settled in the small town of Archer City, Texas. Kinsey is known for her roles in The Office (US) and Haters Back Off.

She shares daughter Isabel Ruby with ex-husband Warren Lieberstein.note brother of Paul Lieberstein, who played Toby Flenderson on The Office in addition to being a writer and showrunner Currently married to Josh Snyder, she's the stepmother of his two sons, Cade and Jack. Angela and Josh host a YouTube cooking series, Baking With Josh & Ange. She also co-hosts the Podcast Office Ladies with Jenna Fischer, in which they discuss all of the episodes of the series in airing order.