Series / Fresh Off the Boat 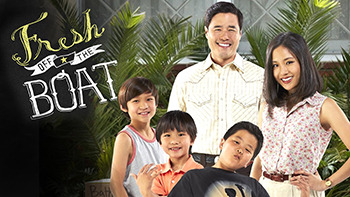 Fresh Off the Boat is a family sitcom on ABC which premiered in the 2015 mid-season. It's the semi-autobiographical story of chef and TV food personality Eddie Huang as his Taiwanese-American family moves from Washington, D.C. to Orlando, Florida so that his father can open a steakhouse. His family is less enthusiastic about the move, but they try to fit in. It also explores the intra-family culture clash between the hip-hop influenced Eddie and his more straight-laced relatives. Randall Park and Constance Wu star as Eddie's parents Louis and Jessica.

It is notable as it's the first attempt at an Asian-American sitcom in twenty years. And unlike All-American Girl, it was renewed for a second season plus positive reviews. It ended its run in 2020 after six seasons, which needless to say makes it the longest-running show with an Asian-American cast in network television history.

See also: Everybody Hates Chris, a show with a similar premise (semi-autobiographical coming-of-age story where a celebrity of color grows up, thus the show is set about 20 years in the past), Happy Days and The Wonder Years (the Trope Codifiers for nostalgic shows).

Fresh Off the Boat provides examples of: