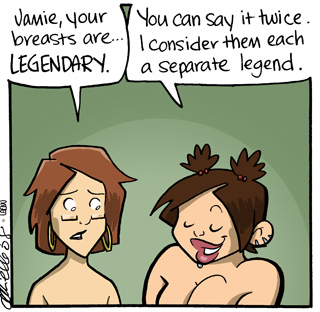 Jeffrey: You have beautiful eyes.
Ariel: They're nothing compared to my tits.
— Soap Dish
Advertisement:

A woman has large breasts and is proud of them. Large breasts are considered attractive in a lot of cultures, so in fiction, it's not rare for a woman to enjoy the advantages or at least feel she should be advantaged because of her large breasts.

Characters like these are prone to parading their "assets" in the presence of male company, sometimes with a little extra bounce in their step, and may often brag about them, unknowingly in front of less fortunate, usually younger and self-conscious female characters. Such women are likely to view their "development" as a way to get what they want, as they are proud of their physical attractiveness. Also unlikely to openly tease distracted young men for staring too long, as it makes them feel hot. Characters feeling pride in their breasts can be used to justify fanservice-style focus on this part of the body.

Frequently overlaps with Proud Beauty. Compare and contrast Buxom Is Better (when someone other than the owner of the bosom in question expresses this opinion), Petite Pride and A-Cup Angst. Contrast D-Cup Distress.