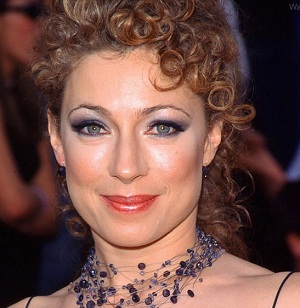 Hello, sweetie.
To be given the gift of life is extraordinary and the best thing we can do is live it as fabulously as we can.
Advertisement:

Alexandra Elizabeth Kingston (born 11 March 1963) is an English actress best known as Dr. Elizabeth Corday (ER) and as Prof. River Song (Doctor Who). Born in Surrey, England, she graduated from the Royal Academy of Dramatic Art and went on to join the Royal Shakespeare Company.

She has also been seen as Mrs. Bennett in Lost in Austen, as awesome defense attorney Miranda Pond in Law & Order: Special Victims Unit, and as Inspector Fiona Banks in FlashForward (2009). She played Moll Flanders in two separate adaptations, and had a minor role in Private Practice as Marla, who romances Sheldon, where she put on a very solid American accent.

With River Song a major part of the sixth series of Doctor Who to the point of fans finally knowing her identity, Kingston has become even more recognizable worldwide, as the show gains momentum outside the Commonwealth (at this point, she mentioned in an interview that she was surprised she's recognized more for Who than for ER). 2011 also saw her star in the miniseries Marchlands, which tells the story of three families in three eras that occupied one particular house and the supernatural events that result. She appeared on the CW's Arrow as Dinah Lance, Laurel's mother. Since John Barrowman is a regular on Arrow, this has led to more than a few Who fans eager at the possibility of a Jack Harkness-River Song

teamup that hasn't yet happened on the other show they shared.

2012 saw her in the revived Upstairs Downstairs, as Sir Hallam's aunt Dr Blanche Mottershead, a bisexual archaeologist. In a September 2012 episode of Who Do You Think You Are?, she found that she has English, German, and Jewish ancestors, one of whom owned a whorehouse, leading her to joke she had found her inner Jew and her inner whore on the same day.