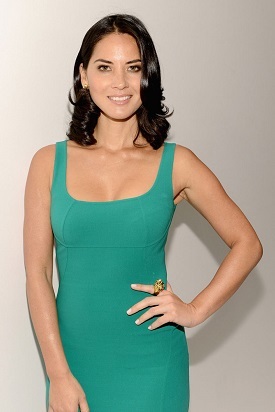 Lisa Olivia Munn (born July 3, 1980 in Oklahoma City, Oklahoma) is an American actor and TV personality. She is better known as the former co-host of G4TV's Attack of the Show! with Kevin Pereira, where much of the show was dedicated to her comedic antics, not to mention her Ms. Fanservice moments. She left G4 in 2010, for a correspondent position at The Daily Show with Jon Stewart, which was her breakout into the mainstream and started garnering more prominent acting roles.

It's also worth noting opinions on her are highly divisive in regard to her image and "authenticity," mainly due to her sexy image and whether or not she's a geek. But she does have an awareness of the controversy and plays to it occasionally.

After leaving G4 in 2010, she was a The Daily Show correspondent and was also cast as financial analyst Sloan Sabbith in The Newsroom, the HBO series written and produced by Aaron Sorkin. In 2016, she portrayed Psylocke in X-Men: Apocalypse.

In 2021, she was romantically linked with comedian John Mulaney and gave birth to their first child.

Tropes associated with Munn's work include: