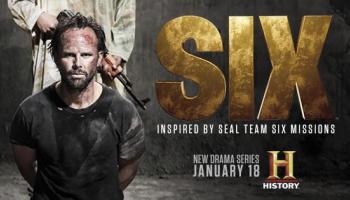 Never leave a brother behind.
Advertisement:

Six (stylized as SIX) is a 2017 TV military drama series produced by the History channel. Eight episodes are scheduled to air, with the first episode on January 18, 2017. It stars Barry Sloane, Kyle Schmid, Juan Pablo Raba and Walton Goggins. The production crew mentions that the show is based on actual missions SEAL Team Six has participated in. Academy Award nominee and military special operations veteran David Broyles have created the series.

The show portrays the lives of commandos who are in the US Navy's United States Naval Special Warfare Development Group or DEVGRU, popularly known as SEAL Team Six as they try to work out their professional and private lives while they're deployed in missions overseas.

The second season began airing on 2018 Memorial Day. History announced that the show will end after the 2nd season airs the last episode.