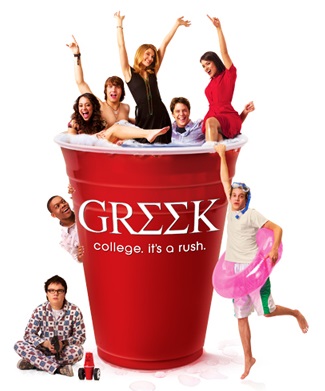 Pictured (from left to right): Dale, Calvin, Ashleigh, Cappie, Casey, Evan, Rebecca, Rusty. Not pictured: Frannie.
"I wanna have a real college experience! I wanna have fun!"
"You don't know how to have fun!"
"But I can learn; isn't that what college is for?"
"Hell no!"
Advertisement:

Greek is an ABC Family original series that can be best described with this equation: "Brotherhood of Funny Hats + Teen Drama + Dramedy + a little nutmeg + some pepper + a pinch of cheese = GRΣΣK".

Set at the fictional Cyprus-Rhodes University in Ohio, the series focuses on Rusty Cartwright, a Nerd fresh out of high-school with dreams of joining a fraternity and having a 'real college experience', while also being a member of the Honors Engineering program and pursuing a degree in Polymer Science. The series begins on his first day at school and ends during his junior year, exploring the goings-on of his friends and classmates, as well as his relationship with his Cool Big Sis, Casey (played by Kelsey Grammer's daughter, Spencer Grammer). Unlike many teen dramas on nowadays, it's not really a drama; College/Greek life isn't treated as a matter of life or death (usually), and some "serious" issues - such as Betsy's alcoholism - are even played for laughs.

The show ran for four seasons, and the final episode aired in March, 2011.

I don't know if you're aware of the following statistic, but two percent of the male population was in a fraternity...