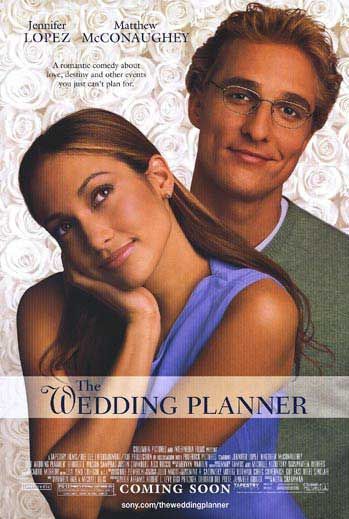 The Wedding Planner is a 2001 romantic comedy film directed by Adam Shankman, written by Michael Ellis and Pamela Falk, and starring Jennifer Lopez and Matthew McConaughey.

After planning and coordinating another successful wedding ceremony, San Francisco wedding planner Mary (Lopez) is hired by catering heiress Fran Donolly (Bridgette Wilson) to plan her society wedding to long-term boyfriend 'Eddie.' She is later saved from a freak accident by local pediatrician Steve Edison (McConaughey). An attraction soon develops between the two, but Mary is crestfallen when she discovers that Fran's fiancé 'Eddie' turns out to be Steve, which causes her to angrily rebuke him for leading her on and going behind Fran's back. Mary is left wondering whether she should continue to plan Fran and Steve's wedding, while Steve is left wondering whether his chemistry with Mary is a sign that he shouldn't be marrying Fran.

Not to be confused with the similarly named (and/or plotted) romantic comedies The Wedding Singer or My Best Friend's Wedding.