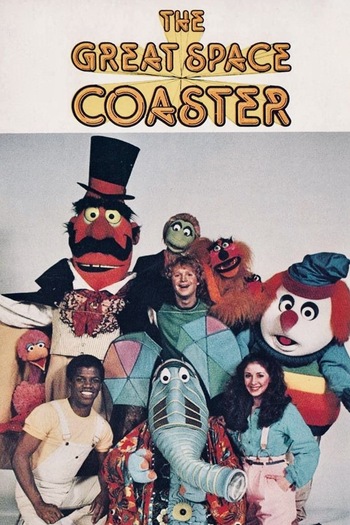 "Shut up, Ricky, just shut up right now! Unless the next words out of your mouth are directions how to get back to the fish skeleton, I'm gonna punch you right in the stomach!"
"Off we go!"
Advertisement:

A children's television series, featuring cartoons, live action segments, and puppets, that originally aired in first-run syndication from 1981 to 1986.

The series was co-created by Kermit Love and Jim Martin, and featured a number of performers who either came from or would go onto The Muppets. The premise follows three musicians from Earth — Roy, a keyboardist; Danny, a drummer; and Francine, a guitarist — who travel to an asteroid-like planet out in space via the titular coaster, piloted by Baxter, a life-sized circus clown puppet who is actually on the run from his villainous ringmaster, M. T. Promises. Other bizarre characters include Gary Gnu, host of The Gary Gnu Show, where no g'news is good g'news; Goriddle Gorilla, a mischievous, gravelly-voiced gorilla who doesn't quite think before he acts; Edison, a robot-like elephant with an echoing voice who loves gardening; and Knock Knock, a sophisticated woodpecker who lives in a tree.

As of 2012, the rights to the show are held by Tanslin Media. Current plans include digitally preserving the old episodes, to potentially donate them to a museum or media center (as the use of licensed songs in the program would make releasing all 250 episodes on DVD or streaming without significantly editing them difficult if not impossible), and the production of new online content featuring Gary Gnu with hopes to garner enough attention for a full-fledged revival. More information can be found on the Tanslin Media site

. The preservation of these old episodes is time sensitive, as the tapes they're on are deteriorating due to age, meaning that most of the show could potentially be gone for good. The initial Kickstarter effort, which originally set out with the goal to save at least one episode, made enough money to start the preservation process for 20 episodes. Currently, Tanslin Media is holding another preservation fundraiser featuring previous Kickstarter merch and rare show memorabilia through eBay

, which so far has raised enough funds to preserve an additional 7 episodes. Several fan-uploaded full episodes of the show can be found on Gnu, uh, Youtube.