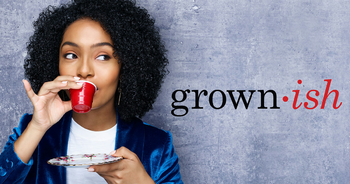 In March 2022, the show received a surprise renewal for a fifth season, keeping it on the air as the mothership show black•ish ended earlier that same year. Yara Shahidi, Trevor Jackson, and Diggy Simmons are the only cast members that have been brought back, and Marcus Scribner is joining the cast and reprising his role as Andre "Junior" Johnson Jr., embarking on his own college experience.

Basically, black•ish is to The Cosby Show as grown•ish is to A Different World.

Tropes found in grown•ish include: