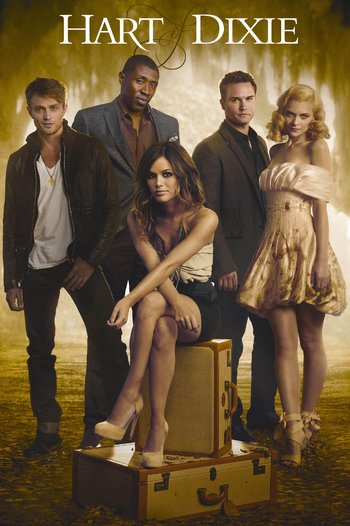 Hart of Dixie was a Dramedy television series airing on The CW. It ran from 2011 to 2015 for four seasons.

Zoe Hart (Rachel Bilson) is a young, aggressive, and driven New York surgeon who seems to have it all.... and loses it really fast, when her doctor boyfriend of six years dumps her for being a workaholic and she doesn't get a cardiothoracic fellowship, which she finds out is because she doesn't really see her patients as people, just as puzzles to solve. The chief advises her to spend a year in general practice to correct this.

She decides to take on the offer of an Alabama practice doctor, Harley Wilkes, who for some reason kept on trying to get her to work at his practice and travels all the way to Bluebell, the town he hailed from, where she finds herself a bit uncomfortable. But as it turns out, Harley is dead... and also her biological father, and he's left her his half of the practice. The other half is owned by resident doctor Brick Breeland (Tim Matheson), who isn't happy to share his job with someone else.