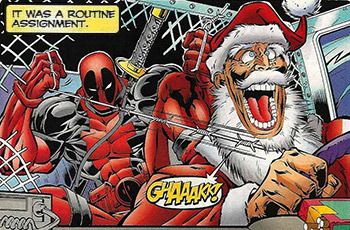 There is a logical reason for this. Well, logical for Deadpool.
Harry Dresden: Um, this isn't what it might appear to be.
Anastasia Luccio: Madre di Dio, Harry. I cannot for the life of me imagine what it does appear to be.
— The Dresden Files, "Day Off"
Advertisement:

The reasons why this is needed can vary, quite often due to Continuity Lock-Out, Mind Screw, and/or a Kudzu Plot.