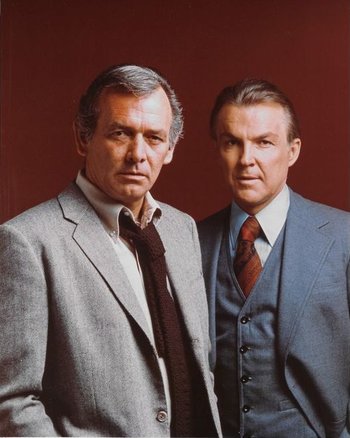 A detective drama starring David Janssen, created by Howard Rodman (who previously was the main writer for Naked City) and produced by Jerry Thorpe for Warner Bros. Television, Harry O featured Janssen as Harry Orwell, a cop who was forced to retire due to a bullet in his back. The injury was suffered in 1969, four years before the first pilot aired.

The first pilot, "Such Dust As Dreams Are Made On", aired in early 1973. Rodman envisioned Harry as a Willy Loman-type character, a hard luck kind of guy, and that was exactly how Janssen played him. In the first pilot, Harry is hired by Harlan Garrison (Martin Sheen), one of the two armed robbers responsible for Harry's injury and the death of his partner. Garrison wants Harry to protect him from his former accomplice (Sal Mineo), who's out to kill him.

The success of this pilot led to a second one a year later, Smile, Jenny, You're Dead, in which Harry is hired by an old friend (Howard Da Silva) to protect his daughter (Andrea Marcovicci), a model who's being stalked by an obsessed and murderous admirer (Zalman King).

After the two successful pilots, ABC commissioned a series, which debuted in the Fall of 1974. Set and filmed in San Diego, Harry lives in a houseboat on the beach and continues to work as a private investigator. His contact on the police force is Lt. Manny Quinlan (Henry Darrow), who tolerates Harry's constant presence in his office because they were friends while on the force together. Manny eschews Harry's constant requests for information on whatever case he's working on with what seemed to be a mantra for him..."Stay out of it, Harry!" Naturally, Harry never does, gets in over his head, and Manny and his helpers, Sgt. Frank Cole (Tom Atkins) and Officer Billings (David Moses), arrive to help sort things out. Harry also has a very unreliable car, which is always in the shop of his mechanic, Roy Bordello (Mel Stewart), so oftentimes Harry has to ride the bus to get around. This led to a very interesting chase scene in one of the early episodes...would you expect to see a bus chasing a car?

After 14 episodes, the first case of Executive Meddling came into play for Harry O. ABC and Warner Bros. both felt that the cost of filming in San Diego was too high, especially for a series that wasn't pulling in big numbers, so the decision was made to move the location to Los Angeles. This meant that a whole new supporting cast was necessary. Harry's new police contact was the irascible Lt. K.C. Trench (Anthony Zerbe), assisted by Sgt. Don Roberts (Paul Tulley). Harry now lived in a house at the beach, with a gorgeous new neighbor, a stewardess played by Kathrine Baumann, and Harry's car, which all of a sudden became more reliable, was now in the hands of Spencer Johnson (Bill Henderson). The wistful theme music and opening credits were retooled to make the show more exciting.

For the second season, the theme music and, especially, the opening credits, were made over again. Harry got another stewardess for a neighbor/occasional girlfriend, Sue Ingram (Farrah Fawcett-Majors). Anthony Zerbe won an Emmy for Best Supporting Actor in a Drama, and the series was a constant Top 20 performer. Despite all of this, the series was history once Fred Silverman took over as President of ABC. He canceled a number of popular series, including Harry O. David Janssen, who had found a character that he developed and enjoyed playing, was so upset that he decided never to do another TV series ever.

Compare with The Rockford Files, a more lighthearted (and successful) series about a down-on-his-luck private eye from The '70s.