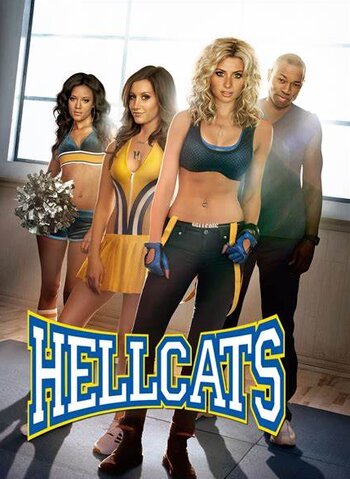 Election meets Bring It On. Bring It On In College! Or possibly Bring It On meets Glee with a little bit of Legally Blonde thrown in for good measure.

Marti Perkins (Alyson Michalka) is a pre-law student at Lancer College in Memphis. Unfortunately, due to the actions of her mother, her scholarship has been revoked. Looking for a new scholarship so that she can stay in school, Marti comes across what may be her only chance: cheerleading.

The Hellcats are the cheerleaders for Lancer, a predominant football-dominated college, and Alice, one of the main cheerleaders, has broken her wrist, meaning they have to have tryouts. When Marti shows that she has the stuff, even the captain Savannah (Ashley Tisdale), who had an almost-violent confrontation with Marti the day before, votes her in.

Things could be looking up for Marti — if the cheerleaders can place in Nationals. If they can't, their budget will be cut, the competition will be out, and no more scholarships...

Based on the book Cheer: Inside the Secret World of College Cheerleaders by journalist Kate Torgovnick, Hellcats ran for one season (2010-2011) on The CW.

Not to be confused with The Hellcats, a biker gang exploitation film from The '70s featured on Mystery Science Theater 3000.