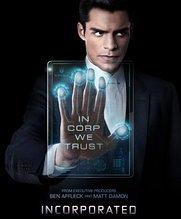 In corp we trust.
Fascism should more properly be called corporatism, since it is the merger of state and corporate power.
—attributed to Benito Mussolini
Advertisement:

Incorporated (2016) was a one-hour show on Syfy. In a 2074 Milwaukee, climate change has wreaked havoc on the populace, and most governments have collapsed. Taking their place are corporations, that have become de facto governments who control areas called Green Zones. The remaining territories are called Red Zones, where governance is weak or non-existent.

One man, Ben Larson (Sean Teale) real name: Aaron, escapes the Red Zone, infiltrating the Green Zone to take them down and find the woman he loves. He is married to the daughter of the CEO and in a position to become an executive but only if he compromises every remaining principle he has. In the process, he will take on the entire system — with deadly consequences.