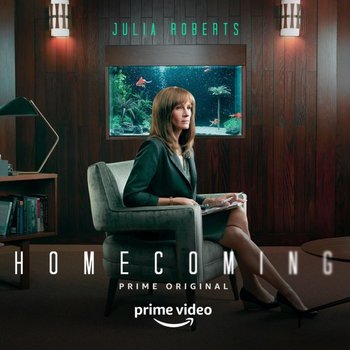 We thank you for your service.
Homecoming is an Amazon Prime Video Original Psychological Thriller Dramatic Half-Hour Anthology series based on the podcast of the same name by Micah Bloomberg and Eli Horowitz.
Advertisement:

The first season alternates between two storylines, both centered around social worker Heidi Bergman (Julia Roberts). Heidi is the primary case worker at Homecoming, a privately-owned experimental rehabilitation center for veterans suffering from PTSD. It’s a dream job at first – but when interactions with her morally dubious boss Colin (Bobby Cannivale) and her most promising patient Walter (Stephan James) arouse her suspicion, she soon realizes that the otherwise idyllic facility holds a dark secret…

Four years later, Heidi has seemingly thrown away her career for a waitress gig at a dingy seafood restaurant when an auditor from the Department of Defense, Thomas Carrasco (Shea Whigham), approaches her to discuss criminal allegations regarding her former place of employment. She must work through unexplainable gaps in her memory to help finally bring Homecoming to justice.

The second season revolves around a woman (Janelle Monáe) waking up in a boat in the middle of a lake with no memories of who she is or why she's there. She ends up meeting a man in the hospital who may know more about her situation that he lets on. This season is a departure from the podcast, following an entirely different cast instead of following Heidi's story.