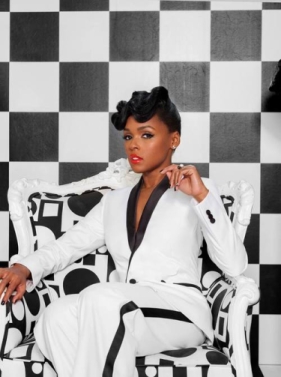 Influences:
I imagined many moons in the sky lighting the way to freedom.
—Cindi Mayweather
Advertisement:

Janelle Monáe Robinson, known professionally as Janelle Monáe, is an American singer, songwriter, rapper, record producer, actress, author, and model. Born on December 1, 1985 in Kansas City, Kansas, as a child, she had always dreamed of being a performer on the stage. She left Kansas for New York to study theatre at the American Musical and Dramatic Academy. At first, Monáe aimed to become a performer on Broadway, but she changed her mind and went to music instead, feeling that music has the power to change the world. Later on, Monáe moved to Atlanta, Georgia, where she met Big Boi from Outkast and founded the Wondaland Arts Society. Big Boi introduced Monáe to Sean "P Diddy" Combs which led her to be signed to Bad Boy Records in 2006, and she later moved to Epic Records in 2015 forming her own label, Wondaland Records, which has since signed a number of other artists.

With few exceptions, Monáe's output is within the Afrofuturist genre. All of her major releases are Concept Albums that address subjects such as discrimination, racism, feminism, LGBT rights and self-liberation using futuristic sci-fi settings. The Chase, The ArchAndroid and The Electric Lady tell the story of the futuristic dystopia of Metropolis, starring Cindi Mayweather, a popular musician android and prototype for the equally popular, mass-produced Alpha Platinum 3000 droid model. Cindi falls in love with a human named Anthony Greendown and finds a bounty placed on her head as a result. Her album Dirty Computer and its accompanying film (or "emotion picture") tells a different narrative but with similar themes, starring Jane 57821 (played by Monáe) who rebels with her lovers Zen and Ché against the violently conformist expectations of a totalitarian society.

She is also building a successful acting career, including acclaimed roles in Moonlight and Hidden Figures.

The tropes that apply to Janelle Monáe: