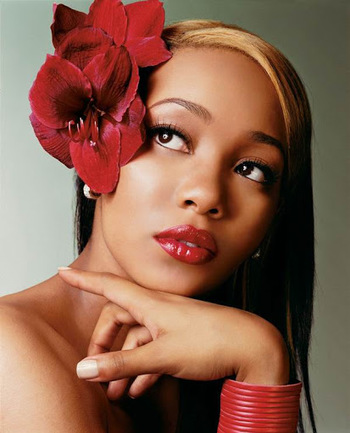 Monica Arnold, also known mononymously as Monica (born October 24, 1980) is an American singer and actor. As a child, she sang as part of her church choir and from there participated in several talent competitions. She was discovered by music producer Dallas Austin at the age of eleven, landed a recording contract (and was managed by Queen Latifah) and released her first album, Miss Thang, contained the singles "Don't Take It Personal (Just One of Dem Days)" and "Before You Walk Out of My Life", which charted at the top of the Billboard Hot R&B Singles chart. Her breakout into the mainstream came towards the end of the 90's, with the song "For You I Will," from the Space Jam soundtrack along with a duet with Brandy, "The Boy is Mine." Her second album, also titled The Boy is Mine was released yielded two more hits, with "The First Night" and "Angel of Mine."

Monica has also acted in several productions, the most well known is MTV telefilm Love Song. She has sold over 5.3 million albums in the United States, and is known by Billboard as she is the youngest recording act to ever have two consecutive number 1 Billboard Top R&B Singles. Also known for having a Friendly Rivalry with Brandy, as she's seen as the Darker and Edgier counterpart to Brandy's squeaky clean image.