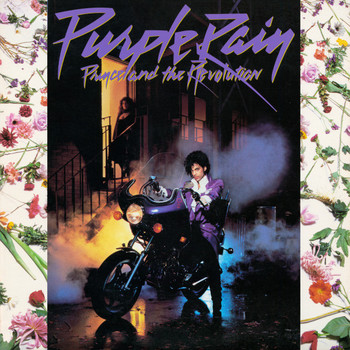 I only wanted one time to see you laughing
I only want to see you laughing in the purple rain
"Dearly beloved, we are gathered here today to get through this thing called 'life.' Electric word, 'life'; it means 'forever,' and that's a mighty long time. But I'm here to tell you there's something else: the Afterworld. A world of never-ending happiness; you can always see the sun, day or night. So when you call up that shrink in Beverly Hills — you know the one, Dr. Everything'll-Be-Alright — instead of asking him how much of your time is left, ask him how much of your mind, baby. 'Cause in this life, things are much harder than in the Afterworld; in this life you're on your own. And if the elevator tries to bring you down, go crazy! Punch a higher floor!"
— Prince's opening spoken-word monologue
Advertisement:

Purple Rain is the sixth studio album by American pop/rock musician Prince, the second with the Revolution as his backing band. It acts as the soundtrack for the 1984 film of the same name. It was released through Warner Bros. Records on June 25, 1984.

It won the Grammy Awards for Best Rock Vocal Performance by a Duo or Group and Best Score Soundtrack for Visual Media. The Title Track even won an Oscar for Best Original Song at the 57th Academy Awards.

Commercially, Purple Rain lifted Prince to megastardom. The album went 13-times Platinum in the United States (later certified Diamond by the RIAA), and also double-Platinum in the United Kingdom. Globally, it has sold over 25 million copies. It is the third biggest-selling soundtrack album of all time.

While not released as a single, the track "Darling Nikki" did gain just as much notoriety thanks to it being a favorite of Kareana Gore Schiff, daughter of senator and later vice president Al Gore's daughter. Al's wife, Tipper, caught a then-eleven-year-old Kareana singing along to the song, and, horrified that her child was singing along to such a blatantly sexual song, co-founded the Parent's Music Resource Center in 1985 with the aim of imposing an MPAA-like rating system on music releases. While the plan didn't work out due to accusations of censorship from the music industry, which came to a head in a court hearing in August that featured counterargument testimonies from the likes of Frank Zappa, Dee Snider, and John Denver, the PMRC did succeed in forcing the music industry to start applying warning stickers to the packaging of albums with explicit lyrics.

So, to put a long story short, this album indirectly caused the creation of the Parental Advisory sticker. Ironically, Purple Rain never received one.

It was selected for preservation in the Library of Congress' National Recording Registry in 2012. The album was remastered in 2015, with a four-disc deluxe edition released that year.

Purple Rain would sell 700,000 copies in 2016, the year Prince died, becoming the top soundtrack album of 2016 and again reaching #55 on the year-end Billboard 200 album chart. It's been in at least the Top 20 of the Billboard Soundtrack Album chart every year since, reaching #4 again in 2021.

"This is what it sounds like when tropes cry":