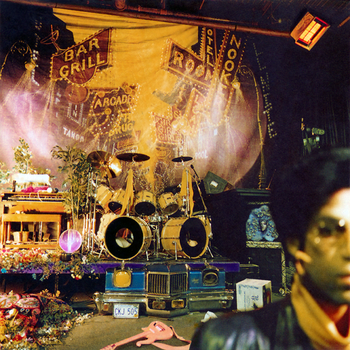 It was ten thirty-five on a lonely Friday night
She was standin' by the bar
She was lookin' alright, yeah

I asked if she wanted to dance
And she said all she wanted was a good man
And wanted to know
If I thought I was qualified, yeah
—"I Could Never Take the Place of Your Man"
Advertisement:

Sign o' the Times, stylized as Sign "☮︎" the Times, is the ninth studio album recorded by American funk/rock musician Prince. It was released through Warner Bros. Records, via the Paisley Park Records label, on March 30, 1987.

It was his first album since his backing band the Revolution had disbanded, and was cobbled together from three aborted album ideas: Dream Factory, Camille, and Crystal Ball. Specifically, it was the result of Warner Bros. noticing the plan for Crystal Ball to be a triple album— a rarity and a huge financial risk— and asking that Prince distill it to just two LPs. While most people in hindsight agree that it was a request made for the better (especially in light of Emancipation, a later triple-CD album generally seen as padded-out and mediocre), in hindsight it's thought of as the starting point of Prince's infamously poor relations with Warner Bros, culminating in him adopting the unpronounceable "Love Symbol" as his stage name for much of The '90s.

The album was a considerable commercial success, peaking at No. 4 on the Billboard 200 and topping the charts in Switzerland, going on to become the 47th best-selling album of 1987 in the United States; additionally, the Title Track, "U Got the Look", and "I Could Never Take the Place of Your Man" all charted within the Top 10 on the Billboard Hot 100. The album was also certified platinum in the US, the UK, and the Netherlands, double-gold in France, and gold in Australia, New Zealand, Germany, and Switzerland. Following Prince's death in 2016, the album made enough posthumous sales to re-enter the Billboard 200, peaking at No. 20.

In hindsight, the album is also seen as a End of an Era in two regards. Firstly, it was seen as a last hurrah for black music prior to hip-hop's takeover of the landscape during The '90s, being the last major blockbuster from a black artist who didn't rap. While Prince's initial response to hip-hop was tepid at best, even he would later embrace the genre for much of the proceeding decade. Secondly, the album is regarded as the de-facto Grand Finale of the vinyl record's era as the dominant format for music releases. Not only was it the last major double-album blockbuster to be primarily oriented for vinyl, but the single "I Could Never Take the Place of Your Man" was also the last of Prince's singles to not be immediately available on a Compact Disc. In that sense, Prince's send-off to the vinyl era most certainly allowed it to end with a bang.

The album was supported by the Title Track, "If I Was Your Girlfriend", "U Got the Look", and "I Could Never Take the Place of Your Man". He did manage to score three Top Ten hits on the Billboard Hot 100 ("U Got the Look" was the highest, at #2), and all four were also hits on the UK pop chart.

She couldn't stop troping 'cause she knew he was going to stay: