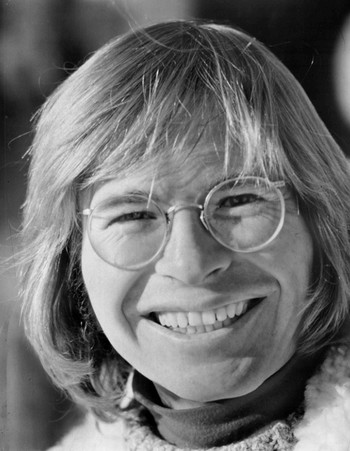 Henry John Deutschendorf Jr. (December 31, 1943 – October 12, 1997), better known as John Denver, was an American singer-songwriter whose music was a mixture of pop, country, folk, western, and soft rock influences. He was also an occasional actor, and — later in life, inspired by his love of nature — an advocate for environmental and humanitarian issues. Among other distinctions, Denver was the featured guest-star of more Muppet productions than any other guest, with two prime-time TV specials (and accompanying soundtrack albums) on top of his appearance on The Muppet Show in 1979.

One of the best-selling U.S. artists of The '70s, Denver's success waned somewhat after the decade's end but he retained a solid fanbase. He also earned the respect of Dee Snider (of Twisted Sister), among others, by confounding expectations during his testimony at the PRMC hearings in 1985. The committee obviously expected Denver to side with them, viewing him as a non-rebellious "safe" artist with a very wholesome image and non-threatening persona and music. Denver, very politely but nevertheless forcefully, rebuked the committee's attempts to censor music, stood up for artistic freedom and pointed out that his own song, "Rocky Mountain High" (about his love of nature and the "high" he got from being outdoors in the stunning Rocky Mountains), had in fact been banned on certain radio stations for its supposed endorsement of drug use.

Denver's personal life was darker than his music; he was married and divorced twice, and came close to choking his first wife during their breakup but fortunately came to his senses before any harm was done. He also had issues with alcohol in The '90s, twice being arrested for driving under the influence. Denver continued to write, record and perform the music he loved until he died after crashing his plane in California's Monterey Bay on October 12, 1997.

John Denver and the Mushrooms

John Denver changes the words to "Nobody Knows The Troubles I've Seen" when singing surrounded by a bunch of mushrooms. The mushrooms don't like the new lyrics...

John Denver and the Mushrooms

John Denver changes the words to "Nobody Knows The Troubles I've Seen" when singing surrounded by a bunch of mushrooms. The mushrooms don't like the new lyrics...