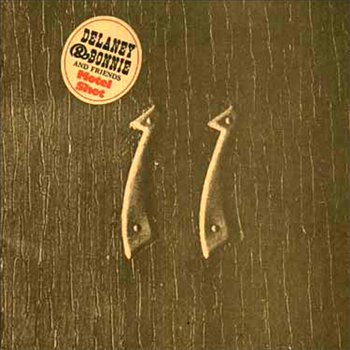 "If this album can make one person feel half of what I felt on this session, then I am happy. It is to all of you with love."
Bonnie Bramlett, from the liner notes
Advertisement:

Released in 1971, Motel Shot is the fifth album recorded by soul singers Delaney and Bonnie Bramlett. Designed to recreate for listeners an informal jam session of the sort touring musicians would engage in to unwind, similarly to the oft-bootlegged Million Dollar Quartet sessions. Motel Shot features high-profile guests - Delaney & Bonnie and Friends had a LOT of friends in the pop community - playing acoustic takes, mostly of old standards. Seven of the twelve tracks are covers and four of those are religious hymns. The album's concept prefigured MTV Unplugged by nearly two decades, serving as the Trope Maker for the Unplugged Version.

I've got a neverending list of tropes, from now on, that's all I wanna do...