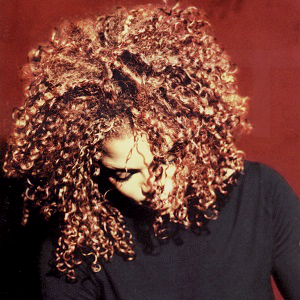 When I feel that I don't belong, draw my strength
From the words when you said, "Hey, it's about you baby."
Look deeper inside you baby

The Velvet Rope is the sixth studio album by American singer Janet Jackson. It was released through Virgin Records on October 7, 1997.

Although not a Concept Album itself, her previous blockbuster album, janet., had a lot of compositional similarity to Rhythm Nation 1814 with the interludes between songs. She decided to give the concept album another try with her sophomore effort at Virgin, but not without a ton of roadblocks along the way.

Production on the album initially began after the end of the janet. World Tour in 1995, dealing in then-husband René Elizondo Jr. as a co-producer along with herself and Flyte Tyme (Jimmy Jam and Terry Lewis). However, the growing pressures of the music industry, and increasing self-hate—stemming from years of repressing childhood trauma, which quickly led to her suffering from bulimia, anorexia, self-harm, and body dysmorphia—caused Janet to have a severe emotional breakdown, and production on the album stalled. Janet also began questioning her own sexual orientation during this low period.

In-between her recovery and resuming recording sessions for the album, Janet's deal with Virgin expired, and she briefly re-signed with A&M Records in 1995 to release the compilation Design of a Decade: 1986-1996, which also served as a Milestone Celebration for Control, and recorded the duet "Scream" with her brother Michael for his ninth studio album HIStory. After the album ran its course, she was once again a free agent, and a second bidding war ensued for her services, with Warner (Bros.) Records, DreamWorks Records, her brother's record label Sony Music, and even Disney, all throwing their hats in the ring. Ultimately, she re-signed with Virgin for an unprecedented $80 million, one-upping the record-breaking contracts her brother and Madonna had signed a few years prior.

By late 1996, Janet had recovered from her breakdown, and spent the first six-and-a-half months of 1997 working on the album almost nonstop. She finally stepped away from the New Jack Swing sound, and focused on Hip Hop Soul, and Contemporary R&B. She also began to flirt with Trip Hop, and added in elements of Jazz, G-Funk, and even folk music. Because the album was heavily influenced by her breakdown, the themes were Darker and Edgier, exploring depression, sadomasochism, online relationships, domestic violence, and homosexuality. Doing so got the album banned in Singapore. It also solidified her status as a sex symbol, and earned her the praise of the LGBTQ+ community.

The music video for "Got 'til It's Gone" won the Grammy Award for Best Music Video, Short Form in 1999. She also won Top R&B Artist from the Billboard Music Awards in 1998.

Janet conducted another world tour to promote the album from April 1998 through January 1999, with 125 performances over six legs. The October 11, 1998, performance at Madison Square Garden was broadcast live on HBO with 15 million viewers, and later released as a live album and concert DVD, The Velvet Rope Tour: Live in Concert. The concert tour album went Platinum as well.