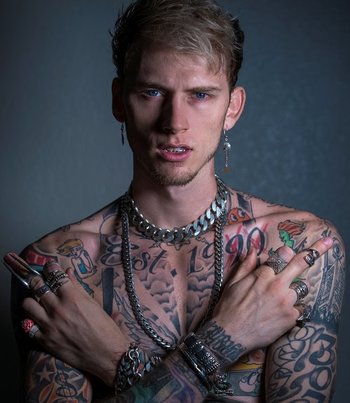 Getting his name from his fast, rapid-fire lyrics, he released his first mixtape in 2006. In 2009, he became the first rapper to win at the Apollo Theater in Harlem, boosting his rise to popularity.

In 2011, while at SXSW, he caught the attention of Sean Combs, who signed him on to his record label, Bad Boy Records. His first EP, Half Naked & Almost Famous, dropped in 2012, with his debut album, Lace Up, arriving later that same year, which met with success. Since then, he has been nominated for a number of award categories, while his music continues to chart.

Beginning in 2019, he started to move away from hip-hop towards Pop Punk, forming a strong collaborative relationship with Travis Barker that resulted in far greater commercial success than he'd previously seen, and sparking a revival in mainstream interest in the genre in The New '20s.

Due to a certain beef he was involved in, Machine Gun Kelly makes appearances in Eminem's Slim Shady mythology. His unflattering characterisation under his rival's pen can be read about on Eminem — Beefs.