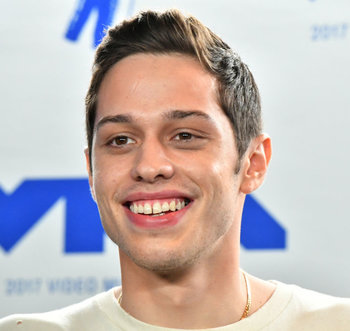 Peter Michael Davidson (born November 16, 1993 in Staten Island, New York) is a New York-based comedian best known for being a regular castmember on Saturday Night Live from 2014 to 2022.
Advertisement:

His father, firefighter Scott Matthew Davidson of the New York Fire Department, tragically died on the events of 9/11 when Pete was seven years old. This is frequently joked about in his stand-comedy (which he started doing as a therapeutic way to cope with this trauma) and occasionally his SNL appearances. Pete also has a younger sister named Casey, who had a brief, non-speaking part on an SNL music video during one of their SNL Stays At Home episodes. His movie The King of Staten Island is basically a semi-autobiography about Davidson struggling with his sanity and using drugs as a coping mechanism for grieving over his deceased firefighter father, especially when his sister moves away to college and his mom starts dating for the first time in years...and her new man is another firefighter.

Outside of his work, Davidson is also notable for his many public relationships with other celebrities, including Ariana Grande (to whom he was briefly engaged, and who wrote a song named after him on her album Sweetener), Margaret Qualley, Kate Beckinsale and Kim Kardashian.

Despite their names being similar (and despite a notorious misspelling on the front of Doctor Who Magazine), he has no relation to Peter Davison.