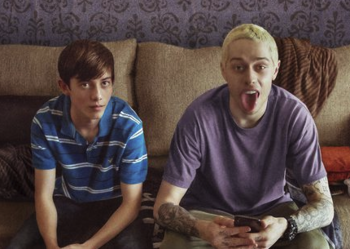 "When you get older, that's kinda all life is, just a bunch of scribbles and dicks and violence all in a void."
—Zeke
Advertisement:

Big Time Adolescence is a 2019 coming of age film that premiered at Sundance before being picked up and released by Hulu in 2020. It stars Griffin Gluck Pete Davidson, Machine Gun Kelly and Jon Cryer, and it serves as the directorial debut for Davidson collaborator Jason Orley.

Mo (Gluck) is your typical 16-year-old high school kid, except instead of hanging out with kids his own age, he kicks it with his sisters' ex-boyfriend Zeke (Davidson) and his group of twenty-something friends. Under Zeke's influence, Mo makes moves to win the approval of his crush and the seniors at school through dropping his chivalrous attitude and selling drugs every weekend at parties, much to the chagrin of his well-meaning family. Things begin to escalate from there.