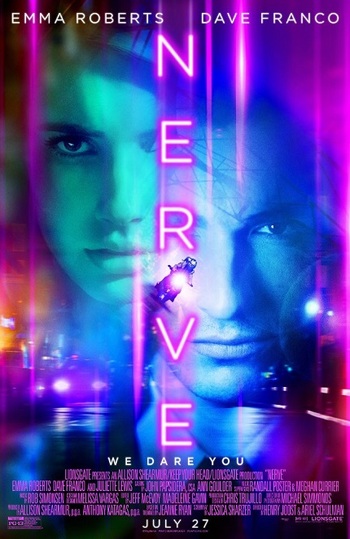 Do you have the nerve?
"Welcome to Nerve. Are you a watcher or a player"
Advertisement:

A 2016 technothriller starring Emma Roberts and Dave Franco based on the novel of the same name.

Venus "Vee" Delmonico is a high school senior who has spent her whole life following the crowd, watching her more daring best friend Sydney take risks and have fun. One day, she decides to sign up for a game called Nerve, which is described as "truth or dare, without the truth." Players take on dares for cash rewards. Watchers pay to watch and suggest dares. The game is dangerous and highly illegal, and all who sign up are warned, snitches get stitches. Vee chooses to sign up as a player, and her first dare is to kiss a stranger for five seconds. The guy she chooses, Ian, is also a player, and the watchers soon decide they like Vee and Ian together, and send them more dares to do together. Vee's having fun at first, but the stakes soon grow too high, and Vee realizes she has to bail, and, preferably, get the game shut down. But the creators of Nerve weren't kidding when they said "snitches" would be punished, and the watchers demand a show...

Dare: Read about the tropes found in this movie. $500. Do you accept?