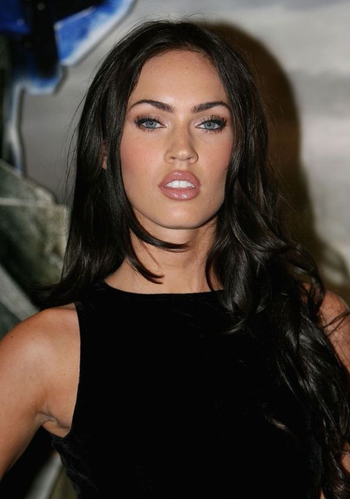 Megan Denise Fox (born May 16, 1986 in Oak Ridge, Tennessee) is an American actress and model. She began acting in the early 2000s, and by the end of the decade was one of the most famous actresses and sex symbols in the industry.

In 2004, she made her major film debut with a role in the teen comedy Confessions of a Teenage Drama Queen. In 2007, she co-starred as Mikaela Banes, the Love Interest of Shia LaBeouf's character, in the blockbuster action film Transformers, which became her Star-Making Role, and cemented her as a defining sex symbol of her time. Fox reprised her role in the 2009 sequel, Transformers: Revenge of the Fallen. Later in 2009, she starred as the eponymous lead in the black comedy horror film Jennifer's Body.

She also became known for practicing Brutal Honesty, being extremely blunt in interviews about her opinion on her public image, her bisexuality, how awful her movies are, how she didn't really act in Transformers, how Michael Bay is nuts, etc. When asked if she wanted to play Wonder Woman, for example, Fox quickly dissed the character, making her unpopular with some segments of comic book fandom. (Ironically, Fox had since starred in two DC comics-inspired films: in Jonah Hex and a Robot Chicken crossover with DC Comics.)

Fox was not included in Transformers: Dark of the Moon because of her statements comparing working under Bay to working for Hitlernote though the context was more about how he drove people to work on the set, than anything about Bay personally. (Bay said in June 2009 that Fox was fired on orders of executive producer Steven Spielberg, who disapproved of her comments about Bay, while Spielberg himself denied this ever happened.) Fox and Bay apparently reconciled sometime afterward, and she was cast as April O'Neil in the Bay-produced remake of Teenage Mutant Ninja Turtles and its 2016 sequel.

. She married fellow actor Brian Austin Green in 2010, and the two eventually separated in 2020. She has three sons with Green named Neil, Bodhi and Journey. Currently, she is in a relationship with the American rapper Machine Gun Kelly, with the two going public in summer 2020; they later announced their engagement in early 2022.

Fox has won both Sexiest Female and Worst Actress awards.