"The truth never set me free - so I did it myself!" 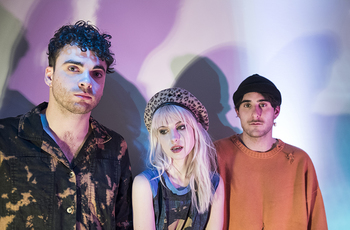 Save for the addition of York, Paramore's main lineup remained mostly unchanged through the release of their first three albums. However, Davis left for five months just after the band was signed, and his departure formed the basis for much of their first album All We Know Is Falling, including the cover artwork and the album title.

While none of the album's three singles charted upon release, a constant stream of touring, including the renowned Warped Tour, brought the band a devoted fanbase. The public were beginning to recognize Paramore as a band to keep an eye on by the time their second album Riot! was released in 2007, reflected in its success through numerous charting singles, most prominently lead single "Misery Business".

A year after the release of their third album, brand new eyes, Josh and Zac Farro quit the band, and the future of the group was in doubt until Williams announced that she, York (now playing all the guitar and drumming in the studio) and Davis would just continue as a trio with touring members.

Their next album Paramore — named as such since it felt like a reintroduction of the band to the world and themselves — became the band's breakthrough, garnering rave reviews and becoming their first to chart at #1 on the Billboard 200 with some of their biggest singles yet.

The band underwent further internal turmoil in 2015 that culminated in Davis' second departure. In 2016, Paramore returned to the studio to develop new material with their original drummer Zac Farro; in 2017, he returned to the main line-up as their full-time drummer in time for the release of their fifth album, After Laughter.

In 2020, Hayley released her first solo album Petals For Armor. A pop album with very deep and personal lyrics, centered around Hayley's struggles with depression, her failed marriage, etc. In 2021, she released a companion album called Flowers For Vases, which continues the self-reflective lyrics of the previous album but goes for a more folk-influenced music style.

”I’m in the business of tropes, let’s take it from the top”: