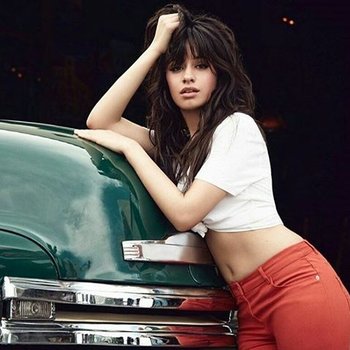 There is no freedom like the freedom that comes from accepting yourself.
Advertisement:

Karla Camila Cabello Estrabao (born March 3, 1997) is a Cuban-American singer and songwriter. She made her musical debut in the second season of The X Factor USA, with the Girl Group Fifth Harmony.

and "Work From Home"

. Before leaving, she had successful collaborations with rapper Machine Gun Kelly - "Bad Things"

- and with Shawn Mendes - "I Know What You Did Last Summer"

Since her departure, she released a single called "Crying in the Club", but found true solo success in her hit "Havana". Havana hit #1 in the U.K. and in the U.S., while also going platinum in both countries, and the video won Video of the Year at the MTV Video Music Awards.

She made her film debut as the title character in Cinderella (2021).