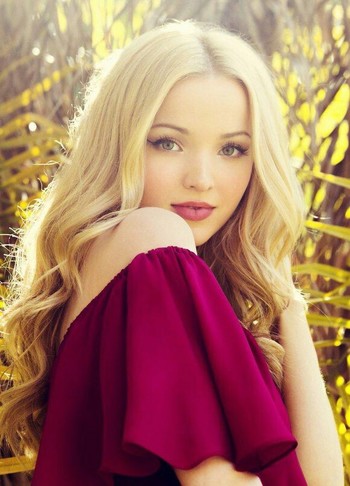 Dove Cameron (born Chloe Celeste Hosterman, January 15, 1996 in Seattle, Washington) is an American actor and singer. She is best known for playing the dual role of both Liv and Maddie in Liv and Maddie, or as Kayla Morgan in Cloud 9 and Mal in Descendants.

Though born in Seattle, Washington, her family also spent time in France and eventually moved to Los Angeles when she was 14.

She and her (now-ex) fiance Ryan McCartan, who also appeared on Liv and Maddie, have their own YouTube channel

for their band 'The Girl and the Dreamcatcher'. Their first single under that name, "Written in the Stars

Outside of her work with Disney, she's also notable for her involvement with Marvel Comics properties. She provided the voice of Spider-Gwen on Ultimate Spider-Man (2012), and reprised the role in Marvel Rising. She also had a recurring role on the fifth season of ABC's Agents of S.H.I.E.L.D..

Tropes applying to her music:

Tropes applying to her works in general: