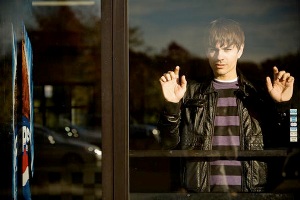 Cage (real name Chris Palko, born May 4, 1973) is a rapper from New York City. He's known for his dark, story-based rhymes, with his later work becoming much more personal.

His lyrics are distinguished from most rappers in that they are extremely personal, though sometimes exaggerated to cartoonish levels (especially on his debut Movies for the Blind). Despite many of his albums and appearances on mixtapes and compilations feature dark portraits of entirely fictional characters, the personal touches on his solo releases has gotten Cage a great deal of appraisal as a lyricist and artist of great talent.

Not to be confused with actor Nicolas Cage, avant-garde composer John Cage, the Heavy Metal band of the same name, the 1989 action film of the same name and its sequel, both starring Reb Brown and Lou Ferrigno, or the Marvel Comics character Luke Cage.

In recent years he's started to become known to mainstream audiences for a few things. For one, his association with actor Shia Labeouf. Shia's a fan of Cage's music, and he directed the music video for "I Never Knew You" and the short film Maniac, featuring Cage and Kid Cudi as a pair of serial killers. He's also (somewhat infamously) known for his feud with Detroit rapper Eminem, who Cage claimed at the time was ripping off his style. Since then he's admitted that he may have overreacted, since both rappers started out at pretty much the same time and Eminem could not possibly have ripped off Cage's style due to having already developed his style in a separate rap scene without ever having heard Cage's music. This inconsistency hasn't stopped Eminem's own Fan Dumb from accusing Cage of the same thing (i.e. ripping off his style).

Cage and his works provide examples of: