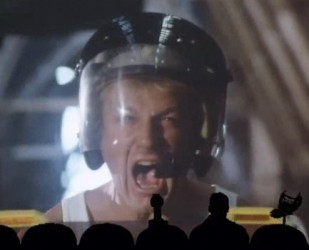 We put our faith in Blast Hardcheese!

Robert "Reb" Brown (born April 29, 1948 in Los Angeles, California) is a former American football player who later went on to become an actor known for his roles in various low budget action movies. He is most famous for his role as David Ryder in Space Mutiny which was featured on Mystery Science Theater 3000.

He seems to have only two settings as an actor. On one hand, you have the emotionally sappy everyman Reb Brown who just wants a normal life (as caretaker of his mentally handicapped friend in Cage, a soldier telling a little Vietnamese boy about Disneyland in Strike Commando, or a wandering artist who just wants to see America in Captain America (1979)). Then you have the insane berserker Reb Brown who breaks loose, screams like a madman and BLOWS SHIT UP! It's not uncommon to see both performances in the exact same movie.

A popular subject on The Spoony Experiment. Though he loves poking fun at the films, Noah "Spoony" Antwiler has said that he really does love Reb as an actor and thinks he could have been one of the big action stars if only he'd had better roles. Reb Brown himself has stated that he loves Spoony's Rebruary videos.

His TV appearances include:

Tropes associated with Red Brown and his characters: