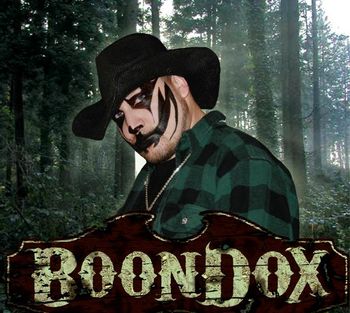 David Hutto (born September 4, 1985), better known as Boondox, is a rapper from Covington, Georgia whose stage persona is a Scary Scarecrow. His music generally mixes Horrorcore, country and rock. Much of his lyrics derive from Deep South fears, à la The Texas Chainsaw Massacre or House of 1000 Corpses. He's also released some Gangsta Rap tracks under the names "Turn Coat Dirty" and "Yung Dirt".

Boondox was the only Southern artist signed to Psychopathic Records. Though he left the label in 2012 due to problems with drug addiction, he came back the next year after he got sober, but left again in 2015, signing with Twiztid's record label, Majik Ninja Entertainment, the following year