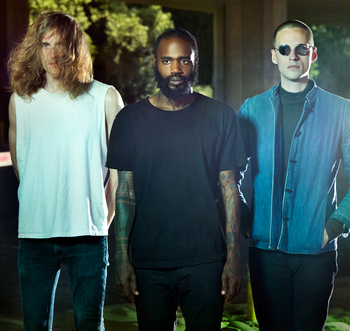 We upload trash.note L - R: Zach Hill, Stefan Burnett (MC Ride), Andy Morin
We bring this for the ones who fiend to see the truth taken back in pain
The weakness of this scene who fucks who lack the nuts to claim
The streets from which that real shit comes to push you up on game!
What's your name? Check it, bitch!
It's Death Grips!
— "Death Grips (Next Grips)"
Advertisement:

Formed in December of 2010, Death Grips is an experimental hip hop group that consists of rapper Stefan Burnett (aka MC Ride), drummer Zach Hill (of the band Hella) and producer Andy Morin.

Their music is a unique and hyper-aggressive blend of noise, samples, noise, Hill's insane drumming, Ride's loud vocals, chaotic production, noise, and subverting and deconstructing almost every hip hop trope under the sun. (But to make for less of a mouthful, it's been summarized as "industrial hip hop" — although that doesn't even cover everything they do.)

They're also known for the sheer nightmarish ferocity of their live shows and the massive following they've gained on the Internet, especially on 4chan's /mu/ board (as well as the Fountain of Memes that has grown as a result).

They're (in)famous for using this extensive following to confound or deliberately mislead fans' expectations, with a famous example being when they announced that they were disbanding in 2014... only to continue making music several months later, to no one's surprise.