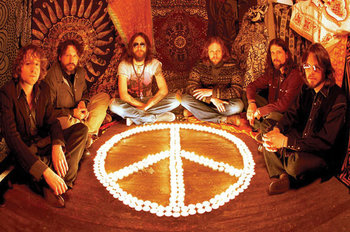 The Black Crowes are a hard rock/blues rock/southern rock band active from 1989 to 2002, from 2005 to 2015 and 2019 onwards. Formed by brothers Chris (lead singer) and Rich Robinson (rhythm guitar), in Atlanta, GA, their sound is a deliberate throwback to the hard rock of the pre-punk era. They take influences from, and are often compared to, Faces, Led Zeppelin, and especially The Rolling Stones (Entertainment Weekly went so far as to say, in a review of their first album, "The Black Crowes are to the early Rolling Stones what Christian Slater is to the young Jack Nicholson : a self-conscious imitation, but fine enough in its own right.").

Regardless of whether you consider them as carrying the torch of roots rock, or plainly ripping off the past, one can not argue with album sales. The Black Crowes were one of the best-selling rock bands of The '90s, having sold over 30 million records. As everyone else went forward with electronic experimentation, The Crowes seemed to challenge themselves to go in reverse. While their first two albums are pure hard rock, their third (Amorica, the one with the female pubic hair on the cover) had a rougher, more garage rock sound. Their next album went for psychedelic rock, which was followed by a record of soul-influenced rock, then blues rock before going "on hiatus" (really, an unannounced breakup).

They reformed in 2005, putting out an album of southern rock, and finally a double album of live, acoustic folk/country rock songs. They broke up again in 2015, but got back together in 2019.

In addition, the band cycled through five other members in their early years, when they were Mr. Crowe's Garden. Aside from the Robinson brothers, drummer Steve Gorman was the only Garden alum to become a Crowe (and he was still their second drummer).

The Black Crowes provided examples of: