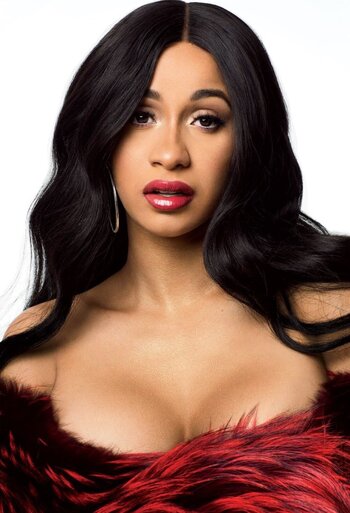 Cardi B (born Belcalis Marlenis Almanzar on October 11, 1992) is an American rapper and a social media personality.

Born in The Bronx, she grew up in poverty and became a stripper at age 19 to pay the bills and escape an abusive relationship. After gaining a large social media following on Instagram and Vine. In 2015 she joined the cast of Love & Hip Hop and grew even more in popularity.

She started releasing music in 2015, with her Gangsta Bitch Music mixtape series gaining a good deal of attention. Her popularity exploded in 2017, with her song "Bodak Yellow" hit #1 on the Billboard charts and multiple high-profile features on hit songs, making her the first female rapper to land her first 3 songs in Billboard in the Top 10. She has since been nominated for various awards, including two Grammy nominations for Best Rap Performance and Best Rap Song in 2018.

Bring a bucket and a mop for these wet-ass trope links: