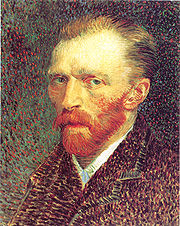 A self portrait of the artist.
"For they could not love you, but still your love was true,
And when no hope was left in sight on that starry, starry night,
You took your life as lovers often do;
But I could have told you, Vincent,
This world was never meant for one as beautiful as you."
— Don McLean, "Vincent" from his album American Pie
Advertisement:

His last name is pronounced the Dutch way: [ˈvɪnsɛnt vɑn ˈɣɔx]. The parts "Vincent" and "van" are more or less pronounced as you'd expect, although in Dutch the second V is more of an "f" and the A is more of a short "ah" sound. People have many ways of pronouncing "Gogh". In regular Dutch, there would be a guttural Dutch G, a short O (as in "log"), and another guttural G. In the dialect that Van Gogh spoke, the G sound is similar but softer, like the "h" in "human". English speakers are more divided. Some pronounce it as "van Goch", as though it rhymes with the Scottish word "loch", while others say "van go" or "van Goff". As with any Dutch last name, the "van" is spelled without a capital letter unless his surname is written on its own.

Van Gogh was born to a minister and his wife, a Replacement Goldfish to their dead son. After growing up with his brother Theo and going to boarding school, he left his small home in the Netherlands to work at an art dealer. After expressing rage at the thought of art becoming a commodity, he was fired. He fell in love with the landlord's daughter Eugénie Loyer, who rejected him when he finally confessed his feelings. This would start a chain of romantic failures. Van Gogh proposed to his cousin Kee Vos-Stricker, who had no interest in him. Van Gogh held his hand over an open flame, saying he would hold it there until he could change her mind. She absolutely refused him. Van Gogh fell in love with a prostitute named Sien Hoornick; his father did not approve of the marriage. She drowned herself in the river in 1904.

Van Gogh fell into depression but decided to enroll in a school to do something with his life. He befriended Henri de Toulouse-Lautrec there, but because of his problems they fell out. He then moved to Arles, a city in the south of France which he described as disgusting and filthy. This didn't show in his artwork, as he made some of his most colorful and vibrant pictures of the city there. He found a friend in Paul Gauguin, who came to stay with him at the yellow house he bought in the countryside. However, the two men did not get on. The main issue was that Gauguin treated Van Gogh as a pupil, whereas Van Gogh wanted to be treated as an equal. After an argument in which Van Gogh allegedly threatened Gauguin with a razor blade, Gauguin ran out and Van Gogh cut off his ear in a fit of mental illnessnote Some accounts say it was only part of his ear. He gave the bit of flesh to a prostitute at a hotel.

After increasing tension and a state of angry paranoia and mental illness, including psychotic episodes that lasted days or even weeks, he returned to Arles. There, 30 townspeople made a petition to get rid of him. He was having paranoid delusions of people trying to poison him. They called him fou roux ("the redheaded fool/madman") and had him committed to an asylum. There, he threw himself into painting, making brilliant painting after painting. After he left, he moved to the outskirts of Paris and remained reclusive. In 1890, he shot himself in the chest with a revolver in the middle of a field. Unfortunately for him, he survived and had to stay in the hospital another two days, eventually dying of infections from the gunshot wounds.

Academic research has discovered, and told during a July 29, 2012 segment

of 60 Minutes, that Van Gogh might not have shot himself as the tale goes but received his fatal wound as a result of a village boy shooting him by accident, and told the authorities he'd shot himself so the poor kid wouldn't get in trouble.

He remains influential and recognizable today and a subject of many Art Imitates Art situations.

The letters written by him to his supportive brother Theo not only give a detailed account of his life but are fascinating literature in their own right.

Works of Van Gogh with their own pages:

Tropes applying to the artist: