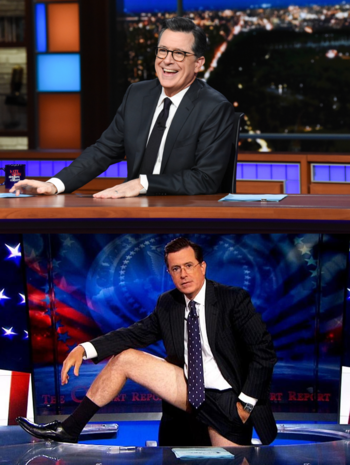 Above: Stephen Colbert, humble liberal satirist.
Below: Stephen Colbert, egotistical conservative pundit. No, they aren't the same person.
"I created a monster
Cuz nobody wants to see Marshall no more
They want Shady — I'm chopped liver"
— Eminem, "Without Me"
Advertisement:

It can be said that some roles take on a life of their own, separate from the actor that plays them. Fox Mulder lives more vividly in our collective imagination than David Duchovny; Leonard Nimoy was so eclipsed by his character in Star Trek that he titled his autobiographies I Am Not Spock and (once he'd made his peace with it) I Am Spock respectively.

However, some actors not only allow the character this existence, they actively cultivate them as a person as real as any other person walking around. This is usually done in one of a couple of ways.

See also Adam Westing, where a celebrity's public persona is a self-parody, but still uses their real name. A sort of opposire of this trope where fictional characters act like their own actors is found in the trope Animated Actors.

In a case of Real Life Writes the Plot, Alter Ego Acting isn't limited to the actors themselves; many of the fans, especially with sci-fi or fantasy series (like the Furry Fandom) use this trope to various levels in regards to their internet personas. In a reversal to the trope being applied to the actors, the third method is usually the most used, to the point where the fans refuse to respond to anything but their alter ego's name. Typically, though, the alter ego has enough personality quirks that only work within the confines of fantasy, the alter ego is unable to be fully emulated in the 'real world' during standard, off-line living and, thus, their real selves are markedly different, no matter how much they try.