Music / In the Life of Chris Gaines 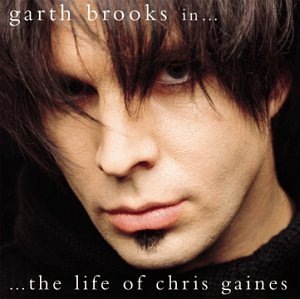 Garth Brooks In...The Life Of Chris Gaines (also known as Chris Gaines: Greatest Hits) is an album released by Garth Brooks in 1999. The album served as the introduction to Brooks' alter-ego character Chris Gaines, an Australian alternative rock singer who Brooks was planning to portray in a movie called The Lamb. As a result, the album is a change in style for Brooks and was intended to be his first official crossover album to pop audiences.
Advertisement:

Brooks promoted the Chris Gaines project heavily in 1999, and devoted most of the year to introducing the character and explaining the concept behind the film-to-be. The character's backstory was also fleshed out through an episode of VH1's Behind the Music and Brooks appeared and performed as Gaines on an episode of Saturday Night Live he hosted that year. Unfortunately, things didn't go well for Brooks. The public and critics were bemused or bewildered by the Gaines character, and the album was treated like a curiosity instead of as the major release it was intended to be. Brooks' long-time fans also disliked the album and its departure from his country sound for a more pop-rock and adult contemporary feel. While the album reached #2 on the Billboard 200, went double-platinum and spun off the #5 Hot 100 hit "Lost in You" (which curiously was Brooks' only Top 40 pop hit in his entire career), it was largely written off as a flop. The bad reception to the Gaines character also meant plans for the movie fell through. After its release, Brooks released only one more album, 2001's Scarecrow, before announcing his retirement from music (He would not return to touring or recording on a major scale until 2009).

Garth Brooks In...The Life Of Chris Gaines was supported by four singles: "Lost in You", "It Don't Matter to the Sun", "Right Now", and "That's the Way I Remember It".

It's just the way of the tropes