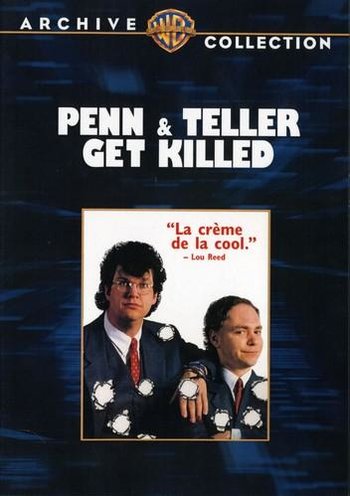 What more do you want?
Penn & Teller Get Killed (retitled Dead Serious in some regions) is a 1989 Black Comedy directed by Arthur Penn, featuring double act Penn & Teller (who also wrote the movie) playing themselves as their stage personas offstage. Confused yet?
Advertisement:

At the beginning, they perform on a talk show where, as part of the act, Penn claims he wishes someone were trying to kill him, to make life more exciting. This is intended as setup for Teller pretending to slit his throat, but it turns out all sorts of people saw the talk show and now recognize him as the idiot who asked people to kill him on national TV. This leads to several attempts being made on their life until, well, Penn and Teller get killed. But not the way you think.

Meanwhile, the two magicians do some magic tricks, demonstrate that psychic surgeons are bullshit, and play increasingly mean tricks on one another.

Penn: You can imagine the sequel thing is kind of a bitch.
Teller: Why didn't we just use different names?
Penn: Damn.