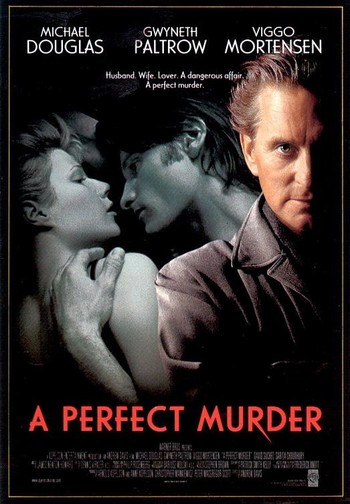 A Perfect Murder is a 1998 thriller film directed by Andrew Davis, starring Michael Douglas, Gwyneth Paltrow, Viggo Mortensen, and David Suchet. It's a remake of the 1954 Hitchcock film Dial M for Murder.

Steven Taylor (Douglas) is a Wall Street hedge fund manager who has risen his way through riches and has a seemingly ideal marriage to Emily (Paltrow). However, unknown to him, she isn't a faithful wife as she is having an affair with a wealthy artist, David Shaw (Mortensen), and plans to leave Steven.

Upon discovering the affair, Steven confronts David and exposes him as a con-artist whose real name is Winston LaGrange and who is after Steven and Emily's money, but offers to pay him a substantial amount of money anyway... in exchange for killing his wife.