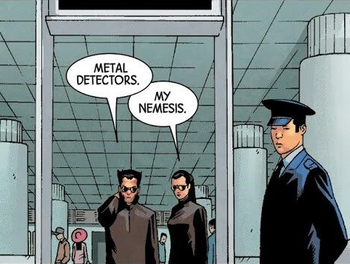 I wasn't carrying a piece—in the Supreme Court, they use metal detectors at the entrance because some politically wired judge complained about the dangerous radicals who might invade his courtroom and shoot it out with the guards. This happens in the Supreme Court about every other century, but you can't be too careful. On the other hand, right across the street in the Family Court, the average litigant carries some kind of weapon and violence is an everyday thing, but there's no metal detectors. That's New York.
— Burke, Strega
Advertisement:

Before entering a high-security area, such as an airport terminal, courthouse, or event venue/arena, visitors will be screened using a walk-through metal detector. The purpose of this device is to detect metal objects, such as firearms or knives, that may be used as a weapon to endanger other guests. The guard staffing the checkpoint may also carry a portable metal detector wand, which is used to pinpoint the location of metal items on a person after they set off the walk-through unit.

If two people walk through the detector in quick succession, making it unclear which individual triggered the alarm, the obviously wrong one is who will be hassled by security. Say, a cartoonish shady character in sunglasses with lots of suspicious weapon-shaped lumps visible under their long-coat and a ticking suit-case walks through with a kind-looking old lady with grey hair on their tail. The latter will be detained, while the former will sneak through unimpeded.

In extreme cases, a party may forget to remove a harmless item, like a belt buckle. They will be treated as a criminal immediately upon triggering the metal detector, with no effort made to investigate what actually set the machine off. This overlaps with Overreacting Airport Security.

Extended Disarming can occur if the character is packing a large amount of dangerous. If the subject's luggage is x-rayed, or in newer works involving body scanners, a Funny X-Ray may be displayed of a character's body or luggage.

While usually a comedy trope, it can be played for drama to show that there is something wrong with a character, by making them set off the detector even though a physical search finds they are not carrying any metal objects on their person. This causes the characters involved to become increasingly confused as they attempt to unsuccessfully resolve the cause of the alarm, hinting that something weird is going on.