Webcomic / Monster of the Week 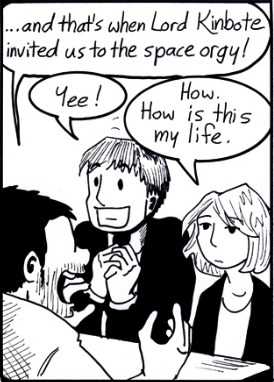 Agent Scully, we have a rogue agent in the basement. Go stare disapprovingly.
Advertisement:

Monster of the Week: The complete cartoon X-Files is a webcomic by Shaenon K. Garrity that started in June 2012 and chronicles The X-Files, episode by episode. Every Friday, a new episode is presented in the form of a neat, black-and-white twelve-panel cartoon.

Long story short, it's The Abridged Series of The X-Files in the form of a webcomic. Of course, some changes were inevitable. Monster of the Week doesn't take itself seriously, throws away multiple plots from the series, Mulder is a Genki Guy, and characters lean on or outright break the fourth wall.

You can start reading it here

. Their Patreon can be found here

note If it reaches $2000, the webcomic will fully be brought out of hiatus.

Not to be confused with the trope or the Tabletop RPG.

Tropes in this webcomic are (among others):