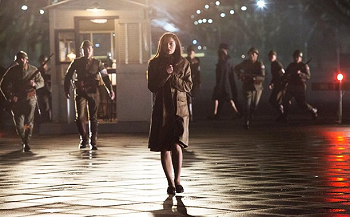 Dr Elliot: If the border to Zaire is closed, how do we get across it?
Munro: Luck!
— Congo
Advertisement:

The endgame of Run for the Border. An Espionage Trope, especially during the Cold War what with the Berlin Wall and other well-guarded communist frontiers.

Sometimes the border is marked by concrete walls, barbed wire, machine guns, attack dogs, and constantly roving searchlight beams. At other times it's merely a stretch of open water or wilderness, but still patrolled at regular intervals.

The Checkpoint Charlie version is when this crossing has to be made at an official border control station. In that case the protagonist better hope their papers are in order.

is now a tourist attraction.

A Super-Trope to Checkpoint Bluff. Compare Metal Detector Checkpoint, Road Block and Walk into Mordor. Nothing to do with reaching video game checkpoints.