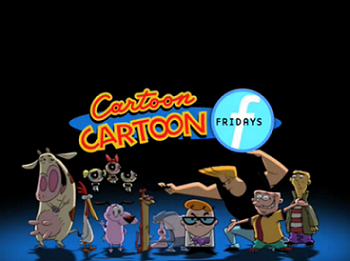 You with us?
Advertisement:

Cartoon Cartoon Fridays was a weekly programming block on Cartoon Network that showcased premiere episodes of the network's original animated comedy series (aka Cartoon Cartoons) from June 11, 1999 to May 16, 2003. During this era, the block would be hosted by a character from one of these series, who would interact with other stars and introduce the shows. When the "Cartoon Cartoon" branding was dropped, the block received a live-action ReTool simply called Fridays, which ran from October 3rd, 2003 to February 23rd, 2007. This version of the block had a more Variety Show setup, utilizing two live action hosts, a studio audience, comedy skits using live-action/animated/puppet characters, and musical & celebrity guests. It also expanded to showcase a mix of Cartoon Network original series and acquired series.

The programming block is one of the most notable aversions of the Friday Night Death Slot next to ABC's TGiF block. While older teenagers and adults were likely out of the house on Friday nights, most children found themselves with nothing to do other than watch television (doing their homework certainly wasn't an option!). And with Cartoon Network entering more homes and being the only channel showing anything brand new on that night...well, you get the gist. Nickelodeon and Disney Channel would later follow the animation channel's lead, moving the premiere slots for some of their shows to Fridays as well during the 2000s.

, which lasted from March 6, 2008 to April 1st, 2010.note Was called "New Thursdays Nights" until it was rebranded on June 5th, 2008. At that point, comedy premieres shifted to Monday nights (while Thursday nights became an encore night for the Monday premieres), with new episodes of the network's shows eventually beginning to air on any given weekday night since 2014 (due to Adult Swim moving to 8pm ET/PT).

CCF had a short-lived revival, of sorts, years later in the form of a rebooted Cartoon Planet. In 2017, Cartoon Network returned to airing premieres of new episodes on Fridays with a block called Friday Party, which had promos that gave priority to Teen Titans Go! and unfortunately caused other shows to obtain lower ratings. After a short hiatus, CN began airing another Friday night premiere block in September 2017, this time with equal promotion given to all shows and a graphical style similar to that of the original Cartoon Cartoon Fridays.